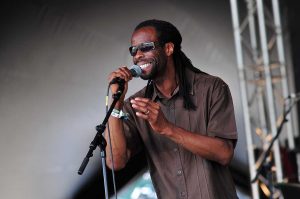 Glenford Latouche has been one of the principle ‘go to’ singers on Manchester’s reggae scene for many years.  As well as being the lead singer in Edward II, performing festivals throughout the word, he is also the lead in the vocal group ‘African Velvet’ and was lead vocalist with the 12 Tribes band ‘Lion Train’.  He regularly appears with the David Henry Review and would have been appearing at festivals across the UK during summer 2020 with Edward II as part of the Dancing Songs project.