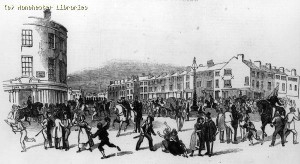 New Cross was a centre of production for penny broadsides in the eighteenth and nineteenth century, with several printers based around Swan Street.   Some of the building around Chadderton Street and Cable Street date from this time, but none of the printers businesses survive. However, ask most Mancunians aged under 60 where the area of New Cross is, and the only reaction you are likely to get is a blank stare.

Until the 1960’s, the area around the junction of Tib Street, Swan Street and Oldham Street was a well known, and quite distinct, district of Manchester called New Cross. The original Victorian trams stopped here on the way out of the city centre towards Oldham, and the name would have been as familiar s Ancoats, Beswick or Ardwick. Historic maps of the area show that Swan Street was originally named New Cross Street, and that there was a physical cross, perhaps even an old market cross – although this is unclear – located in the centre of the junction opposite the Frog and Bucket and the Historic Crown and Kettle pub. The records show that there was a pub on the corner as early as 1734.

The New Cross name is perhaps best associated nowadays with the shop on Tib Street that sells ex-army gear, a ‘destination shop’ for several generations of Mancunians looking to buy their first pair of docs, or maybe some waterproof clothing for a festival. There is also the nearby New Cross Dental Surgery, and it is often the case that when place names that have otherwise fallen out of use, they live on in the names of nearby buildings or businesses.

Although the area is currently overshadowed by its better known neighbours Ancoats, Shudehill and Collyhurst, New Cross may yet see a revival, both as an area of commerce and as a name. Manchester City Council has announced plans to develop the area north of Swan Street, between Rochdale Road and Oldham Street, referring to it as the ‘final piece of the jigsaw’ in the redevelopment of the city centre ( M.E.N. 2015) 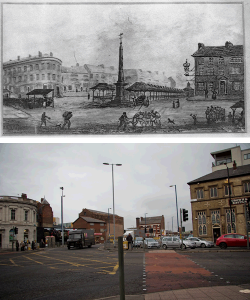 32 thoughts on “New Cross – one of Manchester’s lost locations.”