The commercial appeal of penny broadsides meant printers would produce what could be sold, and many were not really interested in the content, as far as is known (Boardman and Boardman 1974,  1973). It is the case that some printers would even scratch out the name of other printers, and then reprint a ballad for sale without any permission from the original writer and printer (Vicinus 1973).

This can be seen on several of the Manchester Ballads. It also seems that many printers produced ballads without any credit to themselves in order to avoid any legal repercussions from the authorities, as the content of many ballads encouraged and celebrated uprising and dissent (Reid 2015), behaviour likely to land a publisher in trouble.

For example, the version of ‘The Meeting at Peterloo’ repro 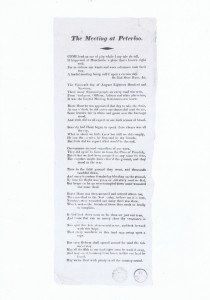 duced in the Manchester Ballads has no  printer credited, see Fig 3. The same is true of the ballad about the meeting at Kearsal Moor (Fig 2), which is, alongside Peterloo, one of the defining industrial protests of the industrial era, and the authorities did not want to see such events glorified in popular song in the pubs across town.