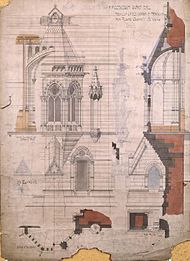 Detail of façades by Alfred Waterhouse

Planning for the new town hall began in 1863. Manchester Corporation demanded it be, ‘equal if not superior, to any similar building in the country at any cost which may be reasonably required’.[7] The choice of location was influenced by a desire to provide a central, accessible, but relatively quiet site in a respectable district, close to Manchester’s banks and municipal offices, next to a large open area, suitable for the display of a fine building.[8] After investigating suitable sites, includingPiccadilly, an oddly shaped plot facing Albert Square was chosen.[9] The Albert Square frontage measures 323 feet (98 m), Lloyd Street is 350 feet (107 m), Princess Street the longest at 383 feet (117 m) and Cooper Street measures 94 feet (29 m). On this tight site, the corporation built a grand hall, a suite of reception rooms, quarters for the lord mayor, offices and a council chamber.[1]

The second stage of a competition to design the town hall which attracted 137 entries was judged byThomas Leverton Donaldson, a classicist, and gothicist George Edmund Street. The eight finalists were Waterhouse, William Lee, Speakman & Charlesworth, Cuthbert Brodrick, Thomas Worthington, John Oldrid Scott, Thomas Henry Wyatt and Edward Salomons.[10] In terms of design and aesthetics, Waterhouse’s proposal was placed fourth behind those of Speakman & Charlesworth, Oldrid Scott and Worthington[11] but his design was considered much superior for its architectural quality, layout and use of light and he was appointed architect on 1 April 1868.[12]