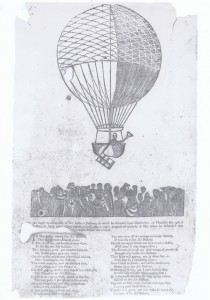 Sadler worked as a pastry chef in the family business, The Lemon Hall Refreshment House, a small shop in Oxford.[1]

Sadler was the second person to make a balloon ascent in England, very soon after the Tuscan Vincent Lunardi‘s flight on 15 September 1784 in the grounds of the Honourable Artillery Company at Moorfields. However, James Sadler was the first English Aeronaut having made his ascent during the month after on 4 October 1784 from Christ Church Meadow, Oxford. The balloon rose to about 3,600 feet and landed near Woodeaton, around six miles away. His second ascent on 12 November, this time in a hydrogen-filled balloon, reached Aylesbury in Buckinghamshire after a twenty-minute flight.[2]

In May of the following year he took off near Moulsey Hurst, Surrey, accompanied by W. Wyndham MP, hoping to reach France, but in fact descending in the Thames Estuary, and thus failing to repeat the earlier exploit of Jean-Pierre Blanchard and his passenger.[3]

Sadler made two further ascents in May 1785, the first of which was from a field behind a gentleman’s garden on the site of what is now Balloon Street in Manchester. On this flight he was accompanied by a cat and landed in Radcliffe.[4] On his second ascent he travelled alone and having risen to 13,000 ft. travelled 50 miles before landing near Pontefract, West Yorkshire. On this occasion, he sustained bad injuries after being dragged for around 2 miles by the balloon, which eventually threw him clear before taking off again empty.

One thought on “How Balloon Street got its name”