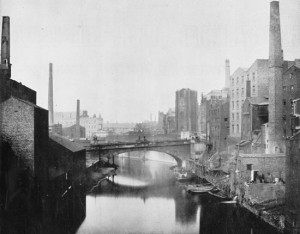 Victoria Bridge is a stone arch bridge in Greater Manchester, England. Completed in 1839 and named after Queen Victoria, it crosses the River Irwell, connecting Salford to Manchester.

The bridge replaced an earlier medieval structure, Salford Old Bridge, which dated from the 14th century. The old bridge was built on the site of an ancient ford, from which Salford took its name. Contemporary accounts of its design are complimentary, but by the 19th century its narrow construction was viewed as an impediment to traffic, and it was demolished. Construction of the new bridge began in 1838, the year of the great gathering on Kersal Moor.   It is mentioned in the reports from the time that the throngs marched passed the construction site on their way to Bury Rd and on up to the Moor. 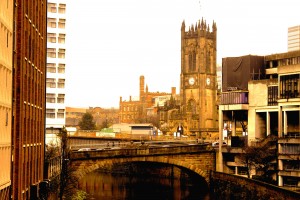 At the time, this was the heart of the city, where the gin houses attracted the crowds and street traders filled the streets, all trying to make a living in the rapidly expanding city, connecting Salford with Manchester and joint the two towns together.

The lyrics of the song ‘Victoria Bridge on a Saturday Night’ describes it as well as anything else. 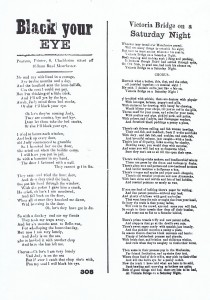 One thought on “Victoria Bridge on a Saturday Night”