The temperance movement had strong roots around Manchester, and when set alongside the numerous pubs and breweries that grew up around the factories and houses, the competing messages can be seen when the ballads are read carefully. In contrast to some of the bawdy drinking songs that were a common and popular topic for penny broadsides (Palmer 1980), Rag Bag is a cutting commentary on the exploitation of drinkers by greedy, lying landlords :

“The landlord fattens on things that are choice,

While his customers starve – both his wife and the mice,

Billy Brown is a cautionary tale of a girl who is abandoned by a man when he finds out she is pregnant. Having agreed to marry her the next day, he joins the Navy, never to return:

“He consented to marry her,

It should be seen the next day,

But instead of marrying this poor girl,

The Spinners Lamentation is a story about unemployment and the decline of work that led to poverty and distress during the cotton famine:

“Come listen dear neighbours to these lines I have made,

Its concerning these times, and distress of our trade,

In both town and country our trade is so bad,

You may search where you will, there’s no work to be had”

The Spinners Lamentation has a printers stock number printed at the bottom that dates it to before 1846, and Boardman notes that “before the days of unemployment benefit, one of the ways unemployed people eked out a living was by going round singing and selling ballads” (Boardman and Palmer 1984: 18) so it may well be that an entrepreneurial Mancunian sold copies of this very song at a penny a piece, having first sung it in the pubs, streets and markets around Manchester.

This collection clearly shows that whilst a ballad may describe a prison (New Bailey Treadmill 1824), an execution (Allen, Gould and Larkin 1867), a new technology (Mr Sadlers Balloon 1785) or a soldier leaving to go to war (The Soldiers Farewell to Manchester c1800), the underlying message of a defiant, happy and resolute Mancunian spirit is never far away.

The themes in the Manchester Ballads speak of struggle (The Spinners Lamentation 1846), poverty (Tinkers Garden 1837), civic uprisings (The Meeting at Peterloo 1819) and communal tragedy (The Great Flood 1872). However, they also recall good nights out (Victoria Bridge on a Saturday Night 1861), day trips around the region (Johnny Green’s Trip fro’ Owdhum to see the Manchester Railway 1832) and the various innovations and achievements of industrial Manchester are mentioned, and praised, throughout. Whilst some ballads are songs about specific events (The Manchester Exhibition 1857) , and are little more than a brief account in order to spread news around the illiterate population, there is often an agenda within many of the ballads that is not always apparent at first glance (Boardman and Palmer 1984). 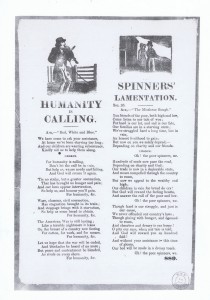 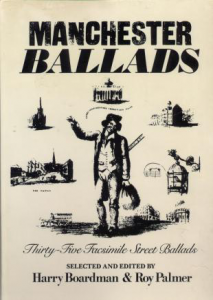 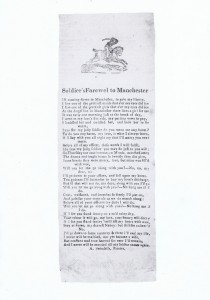 This is the second track in the series, and whilst not really a historical discovery, it certainly fits and given the recent 100th anniversary of Ewan MacColl’s birthday in Broughton, Salford. Just down the hill from Kersal Moor where the Chartists had gathered almost 100 years earlier, Ewan’s birthplace was just around the corner from where some of the band studied, and John Gill (E2’s original bass player) taught at Salford College, just by the Irwell river featured in those early pictures.

Indeed, this part of Salford has a long history of producing creatives and when we lived there I remember John Cooper Clark and Mark E Smith being regulars in the local pubs, such as The Star, now a community owned pub on the edge of Kersal Dale.

This song in fact takes us just a little way from where the chartists gathered, to the gasworks which was just the other side of the A6, to what is now the M602. The Canal referred to is the Manchester to Bury and Bolton Canal which runs up through Salford. In fact, the rumour has it that Salford Council, embarrassed by the perceived negativity of Dirty Old Town, forced Ewan MacColl to change the line from `Smelled the spring on the Salford wind’ to `Smelled the spring on the smoky wind’. (See www.salfordstar.com/article.asp?id=2587) for more info.

Anyway, we hope that you enjoy our take on this absolute classic song from Salford, Manchester.

(abridged from the Morning Advertiser)

The morning was a lowering one but, notwithstanding this, crowds of persons began to assemble in the streets shortly after daybreak and many processions from the country had arrived by nine o’clock. The various trades of Manchester assembled in Smithfield, and previous to their marching to Kersal Moor, presented a formidable appearance in respect to numbers. The Moor is nearly four miles distant from Manchester, and the ground fixed for the meeting is that upon which the Manchester Races take place. The hustings were erected near the Stand-House and in such a position that they were surrounded by an amphitheatre of at least fifteen acres, every person on any portion of the ground being enabled to see all that passed. All along the roads to Manchester the footpaths were thronged to excess, and in the area before the old Collegiate Church, which overlooked the procession, there were many thousands of females assembled. By twelve o’clock one half of the ground was occupied, and the immense multitude even at that time presented a truly awful appearance. Before one o’clock however the ground was completely occupied and the meeting then was certainly the largest that has ever taken place in the British Empire. – not less than 300,000 people could have been present. As the various speakers arrived upon the hustings they were loudly cheered… – Freeman’s Journal and Daily Commercial Advertiser (Dublin, Ireland)[31] 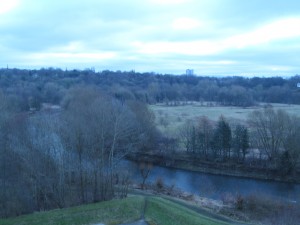 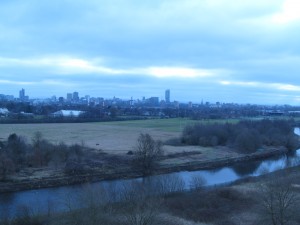 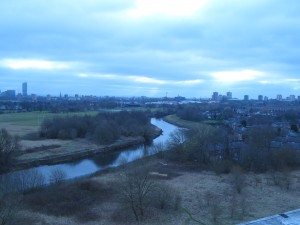 Just 30 years after the previous painting, you can see the transformation of the skyline! 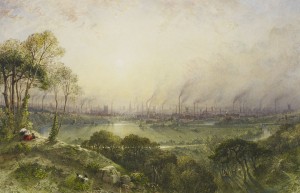 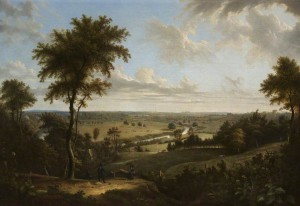 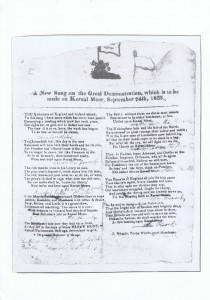